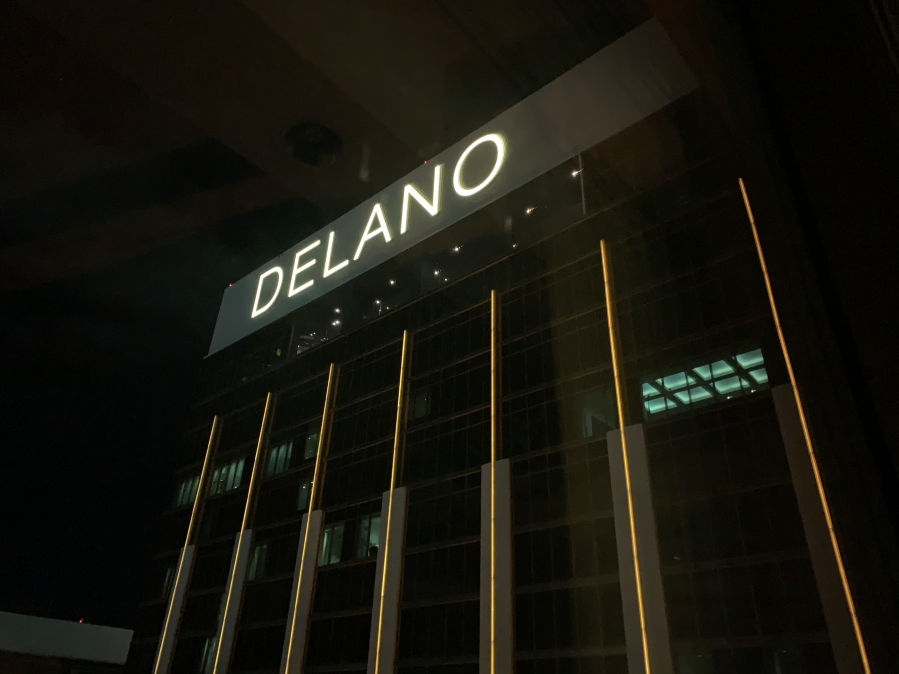 You read that right. With some creatively wasted time and a Fine Hotels & Resorts reservation, Three nights at Delano on our December visit to Las Vegas came to a negative $167 net cost, including the dreaded resort fees. The next three nights at Wynn Las Vegas were about $45 total. Let me tell you how.

Setting up the trip

We went 16 months without a visit to Las Vegas in 2019-2020, but with some vacation time to burn off, we made a return visit to the Strip in December 2020. While there were some pricey meals involved, the core six days of the trip were free thanks to the Wynn Slots mobile game, MyVEGAS games, and American Express Fine Hotels & Resorts (which we’ve written about a few times here on rsts11travel).

If you’re not the type to use Facebook at all, or to play mobile games, these options won’t apply. But for many of you, they’re worth considering. Fine Hotels and Resorts is worth a look either way.

There are now six (6) MyVEGAS games you can play to earn rewards from MGM Resorts properties and partners: MyVEGAS Slots on Facebook, MyVEGAS Slots on mobile, MyVEGAS Blackjack on mobile, MyKONAMI Slots (mobile and Facebook, same game), PopSlots, and MyVEGAS Bingo. Reward are based on Loyalty Points, which are earned by playing the free games or buying in-game currency.

At certain levels of spend, more reward slots are available, and higher level rewards open up, including longer and higher grade hotel comps and Free Play rewards. We’ve played the games for over 9 years, and spent around $600 over that time, so we get six reward slots and pretty much all of the non-host rewards (including occasional 3 night free stays, 2 night Aria and Bellagio stays, and the $100 freeplay reward). We’re not going into full details here; there are Facebook groups and forums about MyVEGAS games that will cover way more than you ever wanted to know.

We’ve ended up with over $1000 in value so far, including about $675 of freeplay, four show tickets including Blue Man Group and Cirque du Soleil, and two free nights at Mirage over the years. And the slots and reward levels are still valid indefinitely, as long as we earn Loyalty Points.

For Wynn Slots, it’s a bit more limited and complicated. They have gems as the reward currency, and VIP level statuses that are required to redeem gems for rewards (a free room with no resort fee; they used to offer buffet rewards before the pandemic). In game purchases of at least $200 are required to redeem rewards, over a 91-180 day period. With comp stays at Wynn, the resort fee is not required, but you have to pay for wifi or gym access a la carte (about $20/day) if you don’t add the resort fee.

The game has VIP level periods of 90 days. You buy up to a VIP level, and get that status for the remainder of the current 90 day period and the entire following 90 day period. So if you buy up to VIP level 3 (VIP3), you can redeem for 2-night stays for at least 90 days (and up to 180 days). Buy up on the first day of your personal VIP status period and you get over 179 days to redeem at that level, with a one day gap required between reservations. At $400 and $750, you can earn VIP4 and VIP5 respectively, which entitles you to 3-night and 4-night stays respectively. Once you have the level, you’re only limited by your gems, which are earned with in game play.

As I said, it’s a bit more complicated, but if you can make more than one trip in six months, and if you play mobile games anyway, it’s worth it.

As we’ve explained before on rsts11travel, American Express offers the Fine Hotels and Rewards program to Platinum and Centurion charge card holders (not Platinum *credit* card holders, like the Delta Platinum charge card, and not the Gold or Green charge cards of course). They are not always the best base rates available, but the FHR benefits can definitely turn the balance in your favor.

Any FHR stay includes early check-in (Noon local time) when available, a room upgrade when available, guaranteed 4pm check-out, daily breakfast for two (usually a $30/person/day credit for our stays), an “experience credit” or “property amenity credit” of at least $100 (often a spa or dining credit), and complimentary wireless service (usually applied as a credit toward resort fees when those are applicable). You get Amex Membership Rewards points for paid stays, or can redeem MR points toward them. And you get all the usual property/chain loyalty rewards either way.

Lining out our stay

We booked our FHR stay at Delano through American Express Travel. By paying with the American Express Platinum card, we got 5 MR points per dollar (effectively a 5% value) on the room and tax charge. The resort fee wasn’t included as it was charged on-site.

The MyVEGAS FREEPLAY rewards were obtained in two batches, which is how we were able to get twice the usual amount. Prior to December 2020, rewards tended to have a batch period of about 90 days, after which they would expire if not used. We were lucky in that the expiration date for the first batch we used was after our check-out date, and we were able to book a second batch closer to check-in date. And with a three day paid stay, we were able to meet the more stringent requirements for the $100 FREEPLAY rewards as well as merging FREEPLAY rewards. This would not have been possible with a MyVEGAS room reward stay.

The Delano / Mandalay Bay stay had a room and fees/taxes cost of about $480. The FHR rewards (wifi credit, dining credit, and breakfast) came to about $297 in real value, bringing the stay to $183.

After the $350 of MyVEGAS FREEPLAY, we effectively got paid $167 for our visit. All of that and more went back to MGM Resorts in the form of other dining and a massage and pedicure visit to Spa Mandalay, but those would have happened anyway.

We also netted almost 40,000 Tier Credits toward MLife status, which would have kept us at Pearl or taken us more than halfway to renewing Gold status if MGM had not already extended status through 2021.

The Wynn reward stay, like the game, was a bit more complicated. Due to the hotel closure in March-May 2020, certain rewards were extended and could be rebooked in August regardless of VIP level at the time. So since we had a three-night stay booked from before some VIP program changes, we were able to rebook that in late August for the December stay. We did pay the $20 for wifi for a day or two while there. So not including dining and gambling at Wynn, we had three nights in a corner room on the 35th floor facing the golf course, for under $50.

About the pandemic part

This was our first trip during the pandemic, and it was unlike any other visit before or since. The airports were almost bare, crowds were lighter than usual even for mid-week, and the casinos were not very crowded either.

Unlike our June 2021 visit, the staffing shortages were not as evident. Restaurants and shops seemed about 50% open, some with limited hours, but we were still able to find excellent food without too much advance planning (which was definitely not the case in June 2021). Casino cocktail service was actually better at almost every property we went to in December compared to just six months later.

We are definitely looking forward to the latest mask round to end, shows to open, and restaurant staffing to recover. We’ve come to expect reservations to be necessary for high end locations (Gordon Ramsay Steak, BLT Steak, and so forth), but we’re not sure which was less satisfying, half-open or half-staffed.

In any event, we’ll be back this December if not sooner, and we’ll see how things change between last month and then.

This site uses Akismet to reduce spam. Learn how your comment data is processed.

Robert Novak is a participant in several affiliate/referral services, and may receive compensation or other consideration if you click or purchase through links in our posts.

These links may include (but are not limited to) Amazon Affiliate Program, eBay Partner Network, and others.

Unless otherwise noted, we are not paid to place these links, but may be compensated if you use them.